I'm a Scientist: Supported by Wellcome and UKRI
Skip to content

About I’m a Scientist

I’m a Scientist is like school science lessons meet the X Factor! School students choose which scientist gets a prize of £500 to communicate their work.

Scientists and students talk on this website. They both break down barriers, have fun and learn. But only the students get to vote.

This is the Cerium Zone. It has a range of scientists studying all different topics. Who gets the prize? YOU decide! 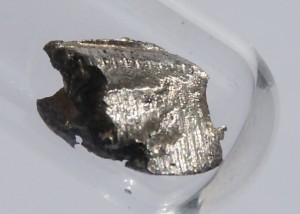 A lump of cerium kept in an inert atmosphere. | Image: Wikimedia

Cerium (pronounced see-ree-um) is a soft, silvery metal, and the 58th element of the periodic table. It’s named after the dwarf planet Ceres (Pluto’s not the only one), and has many uses; it’s added to fuel to reduce the emissions, it’s used to colour glass, and in lights, and in lighters.

This is a general science zone, so the scientists in this zone research a lot of different things.

There’s a scientist looking at evolution; what makes a creature become toxic? And there’s a scientist researching computers; what if they ‘thought’ in pictures instead of words? One of the scientists is looking at how the internet works in rural communities, and ways to make it better.

There’s a scientist looking at what happens to our joints as we age, and one looking at hospital super bugs, and how to treat them.

Students, this is your chance to ask the scientists anything.

Once you’ve registered using the link on the card that your teacher gives you, you can ASK questions to the scientists.

Click this to visit the ASK page, where you can ask the scientists your questions.